MINDFULNESS – ANOTHER ‘FLAVOUR OF THE MONTH’?

Nowadays, you are a therapeutic nobody if you are not into ‘Mindfulness’. It is psychotherapy’s latest ‘miracle cure’. 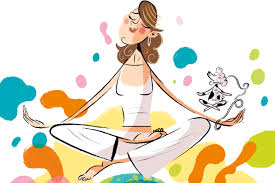 However, before you get too carried away, don’t forget that just like any other human enterprise, psychotherapy too is subject to the whims of fashion. Up until recently Cognitive Behavioural Therapy was the flavour of the month – now it’s so ‘last year’. These days, Mindfulness is the latest ‘must have’ therapy. Didn’t you know?  Are you ‘behind the curve’? Has Mindfulness passed you by? Don’t worry – in a year or two, therapy’s Fashionistas will all be into something else. You can catch up then.

Actually, Mindfulness is not really the bang-up-to-date modern psychological cure-all that its supporters think it is. Like most new ‘wonder therapies’. Mindfulness is only the latest twist on some very old ideas. The fact is that ‘Mindfulness’ is only a new name for some long-established, common-sense, psychotherapeutic techniques, ones that suit some patients and not others. I’ve been using them for years but nobody told me I was being super-trendy.

So, what is Mindfulness? From a psychotherapeutic point of view, it is about encouraging patients to learn how to become very aware of themselves in the present moment whilst at the same time calmly acknowledging and accepting their feelings, thoughts, and bodily sensations. In other words, it is about acquiring the skills necessary to be able to become at ease with all that a patient is experiencing in the immediate here-and-now. Its roots lie in the meditative traditions of ancient eastern religions. There’s nothing in mindfulness that yoga enthusiasts or Buddhism devotees wouldn’t recognise. It’s certainly not new.

Basically, Mindfulness is simply about learning how to become at ease with yourself, about how to become relaxed. There is of course nothing revolutionary about using relaxation as a therapeutic tool. Lots of psychological therapists routinely use Relaxation Therapy, (RT), as a means of treating patients with certain types of anxiety disorders. RT helps patients to learn how to calmly focus on the immediate and then to constructively face their fears. In other words, RT and Mindfulness are simply different sides of the same coin.

In my own practice I use RT because it works, not because it is trendy. Unlike Mindfulness, RT is not based on any spurious ancient, or new-age, belief systems. I’m a scientist and I use scientific principles. The science of RT is based on the biological fact that humans have two major nervous systems. One is the conscious system, That’s the one that we use to think with and to experience emotions and fears. The other is the autonomic system. That’s the one that controls our bodies, (heart rate, breathing, sweating, and other assorted physiological functions). The important biological fact is that these two systems interact with each other. Any ups or downs in one system’s activity levels will cause corresponding movements in the other system. The trick is finding out how to purposely control both nervous systems.

When we feel directly or indirectly threatened we get anxious. These threats can be real or imagined. They can be high intensity and sudden, (a car crash for example); they can be low intensity and long term, (bullying for instance). No matter what sort of a threat it is, when it impacts on us, both the conscious and the autonomic nervous systems rev up and prepare us to deal with it. This is the well-known ‘flight or fight’ response. So, when we become excessively anxious, then clearly these two nervous systems have gone into overdrive. People who suffer from clinically significant levels of anxiety are in a permanent state of heightened conscious and autonomic systems activity. Therefore, when they hit an additional worrying or frightening situation, (real or imagined), their already revved up nervous systems quickly become overloaded. This means that the first key task for the psychotherapist is to help chronically anxious patients to generally reduce their background anxiety levels. The second key task is to help them to learn how to reduce the anxiety engendered by specific real or imagined threats and so not further overburden an already hyper-active system. I have often found that Relaxation Therapy is a very useful way of achieving these two tasks.

Relaxation Therapy is not difficult to apply. It is simply a method of progressively relaxing the body. Initially patients do this under the direction of the therapist. Eventually they learn how to purposefully relax under their own directions. As the body gradually relaxes so too does the mind. Anxieties decrease and panics attenuate – problem solved! On the surface, the methods used to introduce RT to patients might seem similar to those used in hypnotherapy. However, RT is most emphatically not hypnosis. Hypnosis is about a patient temporally surrendering control to the therapist. In direct contrast, the core purpose of purpose of RT is to enable patients to take better control of their own minds, of their own selves. Patients use RT in order to become calmly aware of what’s going on around them; what’s going on in themselves and in the true nature of their own beings. Put simply, they use RT to get their lives into balance in the present and to place tomorrow’s worries where they belong – in the future. The trendies call this Mindfulness. I call it evidence-based psychotherapy.